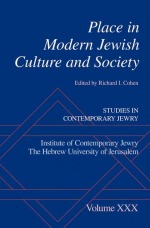 Notions of place have always permeated Jewish life and consciousness. The Babylonian Talmud was pitted against the Jerusalem Talmud; the worlds of Sepharad and Ashkenaz were viewed as two pillars of the Jewish experience; the diaspora was conceived as a wholly different experience from that of Eretz Israel; and Jews from Eastern Europe and "German Jews" were often seen as mirror opposites, whereas Jews under Islam were often characterized pejoratively, especially because of their allegedly uncultured surroundings. Place, or makom, is a strategic opportunity to explore the tensions that characterize Jewish culture in modernity, between the sacred and the secular, the local and the global, the historical and the virtual, Jewish culture and others. The plasticity of the term includes particular geographic places and their cultural landscapes, theological allusions, and an array of other symbolic relations between locus, location, and the production of culture.

The 30th volume of Studies in Contemporary Jewry includes twelve essays that deal with various aspects of particular places, making each location a focal point for understanding Jewish life and culture. Scholars from the United States, Europe, and Israel have used their disciplinary skills to shed light on the vicissitudes of the 20th century in relation to place and Jewish culture. Their essays continue the ongoing discussion in this realm and provide further insights into the historiographical turn in Jewish studies.