Eli Lederhendler; Gabriel N. guest symposium editor: Finder. 2016. “Volume 29: A Club of Their Own: Jewish Humorists and the Contemporary World”. 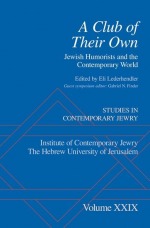 Volume XXIX of Studies in Contemporary Jewry takes its title from a joke by Groucho Marx: "I don't want to belong to any club that will accept me as a member." The line encapsulates one of the most important characteristics of Jewish humor: the desire to buffer oneself from potentially unsafe or awkward situations, and thus to achieve social and emotional freedom. By studying the history and development of Jewish humor, the essays in this volume not only provide nuanced accounts of how Jewish humor can be described but also make a case for the importance of humor in studying any culture.

A recent survey showed that about four in ten American Jews felt that "having a good sense of humor" was "an essential part of what being Jewish means to them," on a par with or exceeding caring for Israel, observing Jewish law, and eating traditional foods. As these essays show, Jewish humor has served many functions as a form of "insider" speech. It has been used to ridicule; to unite people in the face of their enemies; to challenge authority; to deride politics and politicians; in America, to ridicule conspicuous consumption; in Israel, to contrast expectations of political normalcy and bitter reality. However, much of contemporary Jewish humor is designed not only or even primarily as insider speech. Rather, it rewards all those who get the punch line.

A Club of Their Own moves beyond general theorizing about the nature of Jewish humor by serving a smorgasbord of finely grained, historically situated, and contextualized interdisciplinary studies of humor and its consumption in Jewish life in the modern world.