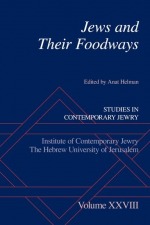 Food is not just a physical necessity but also a composite commodity. It is part of a communication system, a nonverbal medium for expression, and a marker of special events. Bringing together contributions from fourteen historians, anthropologists, sociologists, and literary critics, Volume XXVIII of Studies in Contemporary Jewry presents various viewpoints on the subtle and intricate relations between Jews and their foodways. The ancient Jewish community ritualized and codified the sphere of food; by regulating specific and detailed culinary laws, Judaism extended and accentuated food's cultural meanings. Modern Jewry is no longer defined exclusively in religious terms, yet a decrease in the role of religion, including kashrut observance, does not necessarily entail any diminishment of the role of food. On the contrary, as shown by the essays in this volume, choices of food take on special importance when Jewish individuals and communities face the challenges of modernity.

Following an introduction by Sidney Mintz and concluding with an overview by Richard Wilk, the symposium essays lead the reader from the 20th century to the 21st, across Europe, the Middle East, Africa, and North America. Through periods of war and peace, voluntary immigrations and forced deportations, want and abundance, contemporary Jews use food both for demarcating new borders in rapidly changing circumstances and for remembering a diverse heritage.

Despite a tendency in traditional Jewish studies to focus on "high" culture and to marginalize "low" culture, Jews and Their Foodways demonstrates how an examination of people's eating habits helps to explain human life and its diversity through no less than the study of great events, the deeds of famous people, and the writings of distinguished rabbis.