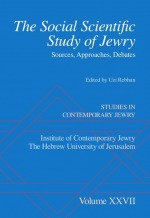 Continuing its distinguished tradition of focusing on central political, sociological, and cultural issues of Jewish life in the last century, this latest volume in the annual Studies in Contemporary Jewry series focuses on how Jewry has been studied in the social science disciplines. Its symposium consists of essays that discuss sources, approaches, and debates in the complementary fields of demography, sociology, economics, and geography.

The social sciences are central for the understanding of contemporary Jewish life and have engendered much controversy over the past few decades. To a large extent, the multitude of approaches toward Jewish social science research reflects the nature of population studies in general, and that of religions and ethnic groups in particular. Yet the variation in methodology, definitions, and measures of demographic, socioeconomic, and cultural patterns is even more salient in the study of Jews. Different data sets have different definitions for what is "Jewish" or "who is a Jew." In addition, Jews as a group are characterized by high rates of migration, including repeated migration, which makes it difficult to track any given Jewish population. Finally, the question of identification is complicated by the fact that in most places, especially outside of Israel, it is not clear whether "being Jewish" is primarily a religious or an ethnic matter - or both, or neither.

This volume also features an essay on American Jewry and North African Jewry; review essays on rebuilding after the Holocaust, Nazi war crimes trials, and Jewish historiography; and reviews of new titles in Jewish studies.